Photo: Bill (center and back row) speaking to University Students

Back in November 2015, MentorLink International Board Member Bill Mann traveled to Africa to conduct several leadership training and mentoring workshops with one of our ministry partners. It was Bill’s first solo trip to a country he’s never visited before to do things he “hasn’t done before.”

Despite a hair raising taxi ride from the airport, harrowing car rides along busy and bumpy dirt roads, a breakfast of snails, and steady rain amid the squalor of the village streets and markets, Bill embraced the adventure.

“It’s a real experience being in the fields and watching God’s hand work through you. I was humbled by the whole thing.”

He continues, “A lot happened in a short amount of time, and it was comforting knowing that I had intercessors praying for me while I was there. Spiritual warfare is alive and well, particularly in a country that has a lot of animism and witchcraft going on. My host and his wife were miraculously unhurt from an accident that totaled their car (just before meeting Bill)…People who came to help couldn’t believe no one was killed…God clearly had His hand of protection on this trip!” 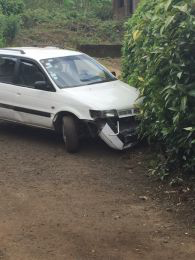 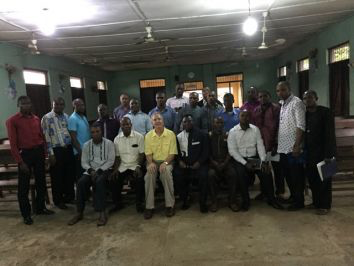 Above left: An example of Bill’s harrowing car rides, Above right: Bill with pastors.

Durning his ten days in Africa, Bill spoke at several churches, conducted leadership and mentoring training for dozens of pastors, businessmen, a women’s group, and about one hundred university students, incorporating many of MentorLink International’s (MLI) training resources such as Days with Jesus (DWJ), Passing it On! (PIO) and the Leader’s Covenant, into the sessions.

“Our training was well received – God changed their hearts about what their leadership style should be and they could see that they had not been leading like Jesus. On the second day of my presentation, they took every page or materials I had brought with me and wanted more.” And following the training, all participants signed up to receive additional training and resources.

Bill also connected with a leader of a large denomination in Africa who spoke his vision of mentoring as a means to build leaders from the next generation.

He had been searching for ways to do this, when he heard of MentorLink and realized the shared vision.

“This is something to pray for,” Bill says, “That the leaders would be open to doing additional training…and if training is arranged, that other church leaders and ministries would join in.”

“It was encouraging,” Bill writes, “that at the end of the sessions, they could all comprehend what biblical leadership was, and were wanting and willing to make changes in the way they led.”